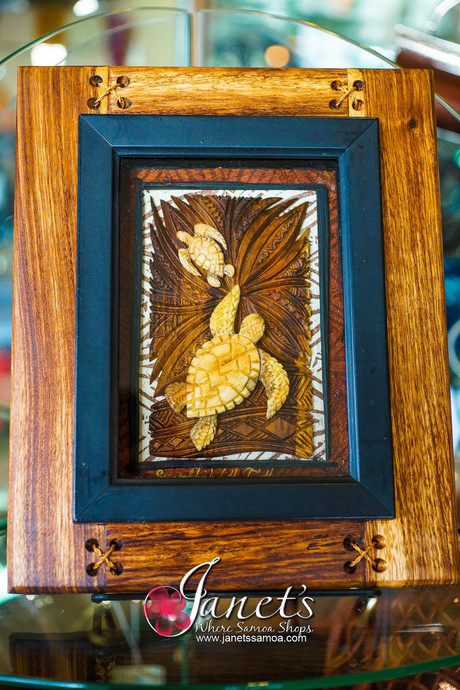 The word ‘Sa’ in Samoan derives from the concept of sacredness (as the ‘Sa’ in the word ‘Samoa’ denotes the sacredness of the land). The turtle or Laumei is found in the earliest of Lapita carvings and markings. It was rarely consumed and in such occasions only those of Royal blood could consume the Turtle.

The Turtle like the Octopus is one of the mythological creatures believed to be linked with the legend of Samoa’s creation. The outstretched arms of the Turtle are a sign of its celebration. At present Turtles are a protected and honoured species in Samoa and the greater Pacific.

Ancient Mastery of the Sea

The Frame of this piece is notable in that it is made of Samoan Hard wood planks tied in the fashion that the ancient sailing vessels were. So secure and seamless were the wood binding of the ancient sea vessels that the First Samoans were able to build countless sea faring vessels of different sizes for different use – whether specifically for hunting, for transporting food and people short distances or for long voyages, the mastery of vessel construction given the limited resources is a testament to Pacific Ingenuity.