Legend of the Shark and Turtle BRF94 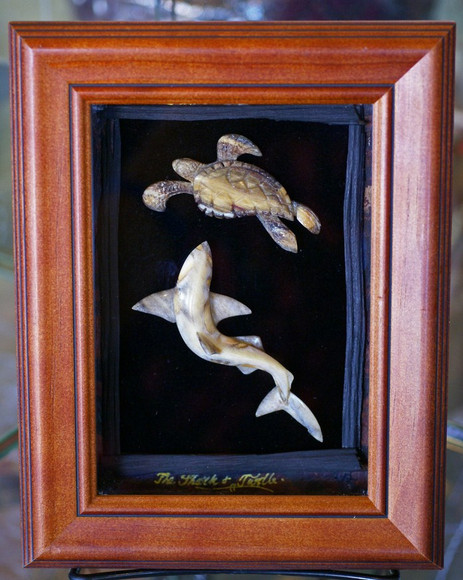 This is the Legend of anold blind women of Salega Savaii and her only daughter named Salofa. Long ago, a great famine spread over the neighbouring villages. One day the Family of Fonuea and Salofa engaged themselves in baking what little Yams they could find which were gathered in the forest the day before. The people were desperate for food. Fonuea with the help of her daughter followed up the progress of cooking from a distance where they lived; they were in pain from extreme hunger. When the smoke disappeared, Fonuea thought the food was covered for steaming and would soon be prepared to be consumed.

They waited anxiously for hours and still could not see anyone coming with food. This continued for many more hours. Fonuea was convinced their family had made off with what little food they had prepared and left them to die of starvation. Feeling deserted, exhausted and demoralised, Fonuea ordered her daughter to lead her to the edge of the cliff near the ocean and asked her daughter to join her in jumping into the ocean. They looked towards the sky and lifted their arms towards it as they leapt.

Upon hitting the surface of the water the hungry and distressed women and child immediately turned into a Turtle and shark. From there they swum Eastward away from the unkind relatives for hundreds of miles until they reached the village of Vaitogi in the Island of American Samoa.

At the sandy beach of Vaitogi they again transformed themselves back into human form. There they met high chief Letuli and his people. They were welcomed with food and clothed. They soon regained their strength.

In order to show their appreciation they approached Letuli and expressed sincere gratitude and vowed to the chief that they would return to the ocean and live just below the Vaitogi cliff. It is there she continued and they would come to the waters surface to dance and entertain them.

Fonuea then recited the chant which brought them (and is sung at Samoan celebration to this day):

Who are they that are upon us?

They are the Letuli’s everywhere.

At rain or at sunshine, the crowd marches in a line

To view the fishes as they shine. War Shout!

Fonuea & her daughter returned to live in the sea in the forms of turtle and shark. For centuries they have lived there and never failed once to appear when the chant is sung.