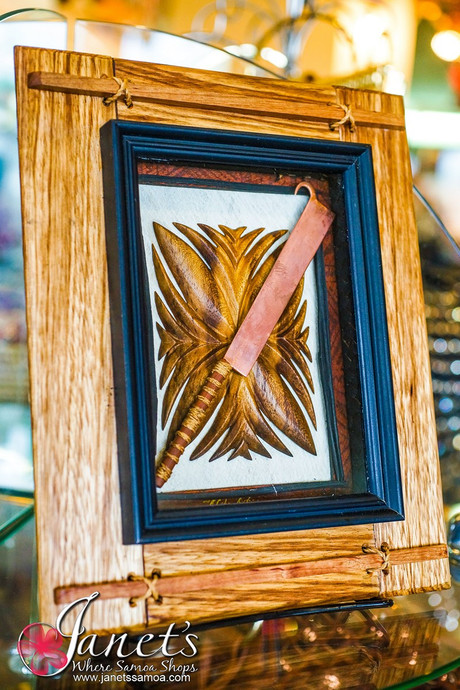 The Knife of Death

Ancient Samoans were not the brutish warriors as sometimes portrayed in popular culture. However, they were, if the families’ well-being was threatened, more than prepared to defend their own. Wars and skirmishes did take place between different clans and even different Islands. And the Nifo Oti or Knife of Death is a record of the fierceness with which those battles could be fought.

In modern times the weapon is used in performance of the World Famous Samoan Fire Knife Dance (Sive Afi) and ornamentation. Placed on a mat, this symbolises times of peace and harmony. Here we see Samoan determination tempered by the values of the Fa’asamoa or Samoan Way – Respect for Other, Love for the Family and Devotion to God.

Ancient Mastery of the Sea

The Frame of this piece is notable in that it is made of Samoan Hard wood planks tied in the fashion that the ancient sailing vessels were. So secure and seamless were the wood binding of the ancient sea vessels that the First Samoans were able to build countless sea faring vessels of different sizes for different use – whether specifically for hunting, for transporting food and people short distances or for long voyages, the mastery of vessel construction given the limited resources is a testament to Pacific Ingenuity.